In addition to writing,  I recently retired from my day job, teacher in the English Department at Worcester State University. My favorite courses, some of which I developed, were:  Romantic and Victorian Gothic; Shakespeare; Witchcraft in Medieval and Renaissance Literature; Screen and Page: Film and Literature; Shakespeare and Film; and Pastoral Literature of the 16th and 17th Century. I love exposing students to ideas (on the page or the screen) that they’ve never thought of before, as well as helping them see themselves in the work of artists new to them. Just as important, not only did I try to get them to think critically and with open minds, but I worked to help them find a voice that accurately, eloquently, and honestly expresses that thinking.

I’m a huge fan of films  and books created during the 1930s-50s, with their blend of sharp wit, humor, and dark suspense. That passion inspired me to write Bait and Switch, Letter from a Dead Man (2017), and Always Play the Dark Horse,  mystery/romance set in the 1940s and  published  by TouchPoint Press.

This series features a sharp, witty, imaginative female lead who’s ripe for a little romance, even if it is mixed in with espionage, deception, and murder. Along the way, she’s helped as well as hindered by her sharp-tongued sister and her wise-guy cat. If you enjoy the strong female characters, humor, ingenious and tense plotting, romance, and vivid recreation of eras past in Susan Elia MacNeal’s WWII suspense novels, Kathryn Miller Haines’s Rosie Winter homefront mysteries, and Rhys Bowen’s Georgiana Rannoch series,  this novel should be your cup of tea.

Click here for a sneak peek at Bait and Switch! 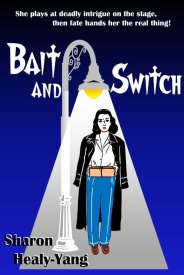 Click here for a sneak peek at Letter from a Dead Man!

Newlyweds Jessica Minton and James Crawford place their bets on adventure, but treachery and murder join the field.

You can buy the paperback or the electronic editions of Bait and Switch, Letter from a Dead Man, or Always Play the Dark Horse by clicking at:

Click here for independent bookstores stores that carry Bait and Switch, Letter from a Dead Man, and Always Play the Dark Horse.