“Saving Souls, Solving Crimes” is the show’s watch phrase. Mark Williams gives heart and warmth, as well as mordant humor, to G.K. Chesteron’s crime-solving padre, traveling his rural parish on his trusty bicycle. In this 1950s era program, you enjoy not just his shrewd unraveling of the mystery but his compassion and 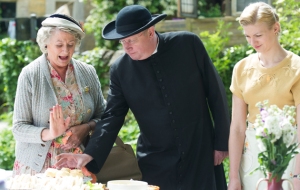 understanding for those he clears as well as those he helps bring to justice. The supporting cast is fine. His housekeeper Mrs. Bridgette McCarthy (Sorcha Cusack) is renowned for her sweet strawberry-cream scones and her tart observations. Alex Price, as Sid Carter, has a roguish charm from his shady past and as well as from a present that takes the law aslant. He’s invaluable for helping Father Brown get around awkward situations (as well as getting him into a few). Lady Felicia Montagu (Nancy Carroll) is gorgeous, from hair and make-up to hats and outfits that give her an elegant flair. The sparks between her and Mrs. McCarthy are a treat! First, Hugo Speer (Inspector Valentine) then Tom Chambers (Inspector Sullivan) took his turn as the chief inspector who initially finds Father Brown’s “help” a royal hindrance. Both actors give their characters a humanity that allows you read them as more than mere antagonists to the good Father’s involvement in crime solving. Topping it all off is the gorgeous English countryside of the program’s rural Cotwolds setting. Maybe Father Brown could solve the mystery of what happened to Kasia Koleczek, as Susie Jasinski, after the first season?

There have been some startling cast changes this year, 2017.  Lady Felicia  departed to join her husband, who has become a high government official in Rhodesia.  The farewell between her and Mrs. McCarthy was deliciously tart and sweet at the same time. Meanwhile,  the burning question of “Where’s Sid?” was only resolved half-way through the season when we found a bearded Sid released from prison and seeking justice for the frame job that put him there.  Then, at the end of the episode, he was off and on the road to find himself.  Will he return?  The door was definitely left open.

Lady Felicia’s sassy niece Bunty, of the fast car and the tight pedal-pushers, is now on hand to pick up the slack for the two missing characters, with her snappy exchanges with Mrs. McCarthy and her left-side-of-the-law assists to Father Brown’s investigations.

Available on dvd and still in production on the BBC. American broadcasts are on PBS.