Phryne Fisher is sexy, sassy, smart, the perfect jazz-baby gumshoe – except she’s no baby. Having lived through WWI as a nurse, having escaped an abusive affair many years ago, Fisher is too independent-minded, sexually liberated, and adept with both a pistol and some martial arts to be anybody’s baby. Even so, she has a good heart and sticks up for the people to whom everyone else gives short shrift. Essie Davis, with her slick Louise Brooks bob, elegantly curved cloches, and snappy 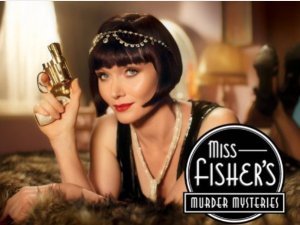 ’twenties togs, gives us a detective with a great sense of humor, an incisive mind, and a taste for adventure. Making the show even more interesting is its setting in 1920s Australia, the country where it’s produced. Phryne plunges into contemporary scandals dealing with Great War criminals, child prostitution, racism, film making, union organizing/busting, the women’s rights movement, and even car racing, to name a few of the topics that spice thrills and intrigue with the thought-provoking. Throughout the program’s two seasons so far, Phryne and Inspector Jack Robinson have gone from being a bit antagonistic to respecting each other to being slowly romantically drawn together, despite their determination to remain independent and uncompromised. Parallel supporting characters Dot Williams, her young companion/housekeeper, and Constable Hugh Williams perform a sweet romantic dance à deux that is both innocent and far more clear-eyed than that of the two main players. The characters are so well drawn (regulars and guests), the acting  so strong, the humor  so deft, and the 1920s ambience so delightful that even if the mysteries weren’t cleverly teased out, you could still enjoy watching the program. Heck, you might even just get up and Charleston to the opening theme! Available on dvd, as well as on PBS and Netflix.

This year, 2020, we have all been delighted with the release of the full-length feature Miss Fisher movie by Acorn TV.   The Crypt of Tears did start to enjoy a theatrical release at selected theatres, but was done in by COVID-19.  Nevertheless, you can stream it on Acorn TV. This link also includes a behind the scenes video and an interview with Essie Davis!  You can also buy the dvd or Bluray. Here’s an article on why many of the supporting cast didn’t make it into the movie